About the Christmas Truce of 1914 and Saying “Yes” 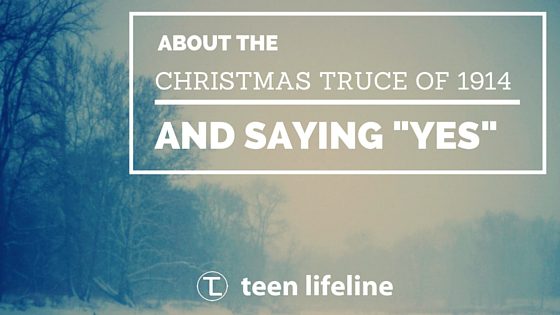 I’m taking the long way around on today’s post, but stick with me.

Over the last few weeks I have been listening to a podcast called “Hardcore History” which covers World War I. Being a grandchild of a soldier in World War II and living in Germany for a few years, I know a lot more about the second war than the first. I’d highly recommend the podcast, but let me warn you – it is super long. The host is quite verbose and detailed, but I feel like it adds to the charm.

What I never realized about the first World War was the level of senseless human carnage. This was a war which bridged the gap between the Old World and the Modern era, especially when it came to warfare. Before this war, most battlefronts involved horses, rifles, and bayonets. This war introduced machine guns, massive artillery, tanks, and poison gas. The world had never seen anything like it.

This war introduced what would be known as “trench warfare”. Soldiers on either side would dig long trenches and fortify their positions with barbed wire, booby traps, and machine guns. So any attempt on an offensive move would result in thousands upon thousands of casualties.

This became a war of attrition. In other words, each side simply hoped to kill more men than the other hoping one would eventually succumb. But this never happened. Generals would spend lives like money knowing there would just be more men behind them to take up the cause and give their lives. Many men from all over the world were thrown into what was called the “meat grinder” of trench warfare – never really considering if their sacrifice meant anything more than becoming another statistic.

This was a hellish war. Men were forced to kill, be killed, and literally live in hell while they waited for either of these fates. You can imagine after a while their spirits would break.

Yet in the middle of all of this senseless killing, an oft forgotten, yet powerful story shines out of the darkness – and as we talk about new beginnings this time of year, I think there are some lessons to be learned.

On Christmas Eve/Christmas Day of 1914, peace made an appearance on the Western Front of the war. Historians disagree on which side this originated (Central Powers or Allies), but a soldier or two started singing Christmas songs. Then more and more men on that side started joining in. The other side took note and started singing back to them. Back and forth they went until a few brave men stuck their heads out of the trenches and walked with white flags towards what was called “No Man’s Land” – the area between the opposing trenches littered with barbed wire, shell holes, and the corpses of dead soldiers.

After a while, both sides put down their guns and met in the middle of the battlefield. They exchanged food, beverages, cigarettes, and any other item of value for a solider in the middle of war. Some accounts talk about soccer matches and other competitive games breaking out between the warring sides while silent machine guns were left unmanned.

Can you imagine “no man’s land” occupied not by bullets, artillery, and corpses, but by life, laughter, and good food?

How can something like this happen? How can peace erupt over one of the most violent strips of land history has ever known?

Simply put – a choice was made by someone to not cooperate.

While their commanding officers were demanding more bullets and bombs, someone decided to sing a song of peace.

And this song was infectious. The song invited others to lay down their weapons. For a brief moment in time at the beginning of what would be one of the major human catastrophes the world would ever know, peace had a say.

Soon after, the men were jerked back into their trenches and commanded to never enter “no man’s land” again without shooting the enemy. Those in power won and war ensued for several more years. Millions upon millions died, and the world was never the same.

But, what if peace had won that day? What if instead of taking up the same fight day after day seeing the same results of destruction and death, the soldiers on each side said –

“I’m not fighting this war anymore”.

What if someone declared war and no one showed up? 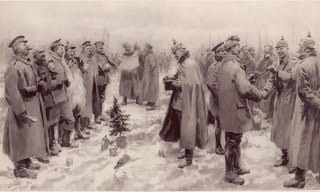 I have worked with teenagers for the last 15 years, and I hear the same stories over and over about the coming generation. If you believed everything you read, you would think the students of today were lumps of flesh with no will, drive, or future in mind. They would be drooling zombies with their hands out wanting the next reward.

The truth is every generation of students has their flaws, and the adults leading them bellyache about it. Lines are drawn, assumptions are made about each side, and trenches are dug down deep.

I believe we need more adults willing to step out and be the first ones to extend the relationship. We need more who will show an abundance of grace and patience to a group who doesn’t need someone else to fight with.

History and culture tell us we need to fight. Battle lines need to be drawn and conflict must and shall commence. While I know conflict will always be a part of relationship, does it have to really be the dominant factor?

So today as you interact with teenagers, do so saying “yes” to them first. Here is what I mean – instead of taking a defensive posture, accept them as they are, where they are. It might look opposite of your ideals, but it is always easier to start a relationship with acceptance or a “yes” than rejection and a “no”.

So today, let’s blur the battle lines. Let’s sing and fraternize in “no man’s land”. Let’s say “yes” to a healthy relationship with a teenager.