How We Deal with “The Bad Kids” Part 3 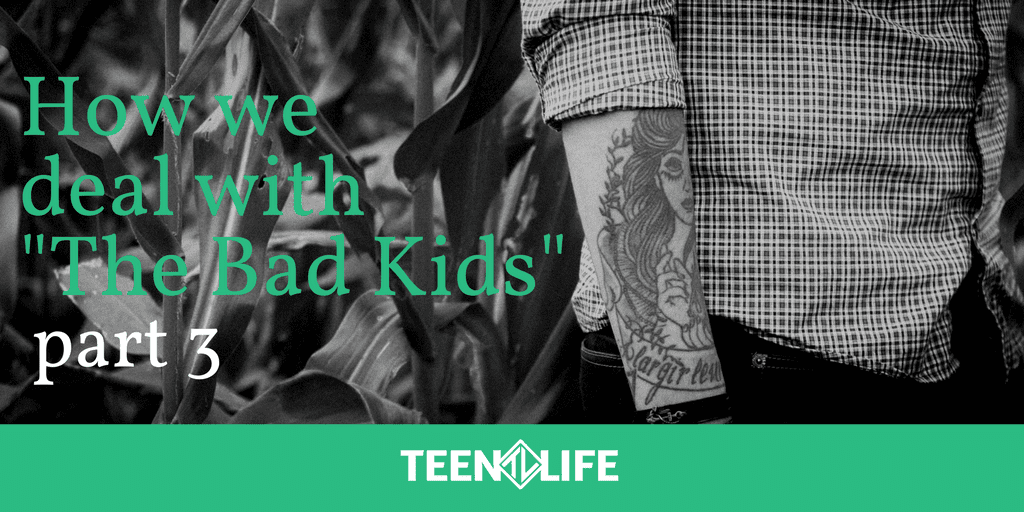 It is hard to imagine a disciplinary process in a school, church, or any other organization dealing with students that isn’t anchored by the threat of punitive action. For so many who are parents, it is hard to think about losing the trump card of grounding or punishment as a motivator for following the rules. As I stated in my original post, most adults in positions of authority tend to go with the most pragmatic approach to discipline, not really thinking about the long-term implications.

As adults, we tend to believe we have the best solution to the problem at hand. If a student steals property from another student, it is up to us to make sure the thief is punished appropriately and the other student gets their stuff back. We want to administer whatever form of justice we feel is swift, sure, and will insure that we can clean it up and move on. Our sense of justice is confirmed often when someone pays the price.

What if there was another way? Could there possibly be a disciplinary model promoting the long-term welfare of the student, accountability to agreed upon standards of classroom conduct, as well as respecting the developmental and social needs of adolescent?

Perhaps a model to consider is that of Restorative Discipline, an off-shoot of the Restorative Justice movement. Restorative Discipline (RD) is a systematic approach to dealing with student infractions and disciplinary issues. Central to this philosophy is the idea of “circling” students in various ways throughout the school day. Teachers are trained in the circling model as the first place students will interact with this form of accountability.

A circle is pretty simple. Basically it is a process where students create literal circles around certain parts of the day, or because of an issue, and no one person (including the teacher) is more important than the other. Everyone has the chance to talk and voice their concerns or opinions. Typically there is something called a “talking piece” (an agreed upon object that, when held indicates a student’s turn to talk) and a few other simple elements. In the classroom, circling is used typically at the first of the week, mid-week, and as a means to close out the week. Sometimes classroom circles occupy the beginning of every day as a means of checking in.

The bedrock of any circle (or any group for that matter) is agreed upon norms, rules, or expectations. In other words, what does the group need to be safe, functional, and an effective learning environment. The entire circle will create a group of norms and those will be posted somewhere in the classroom.

For example, if one of the norms is, “We will respect the right of students to learn,” a common student infraction like being disruptive in class or talking out of turn is dealt with on the basis of the norm and the group instead of outsourcing the discipline to the principal. The group is circled and the problem is addressed with dialogue, respect, and accountability.

There are some more specific circling techniques for more serious infractions that include administration, the accused, and the victim (when appropriate). These cases have a framework for conversation that helps both sides understand what happened, find a way to resolve the conflict, and figure out how to make things right moving forward. Often, family circles can be included by involving parents in the process.

What is so unique about this disciplinary approach is the goal of keeping as many students on their main campus as possible and creating a learning environment based upon respect, restoration, and problem solving.

There are so many aspects to this model, and I am still trying to get my head around how this would work on the many campuses I am on each week. Some of it seems idealistic, but often idealism is a better place to start than the alternative. This approach has been around a long time in theory, but only recently began to be implemented by educators. There are some pilot schools working on this approach in our state of Texas, but the vast majority are still working on the old punitive system.

Do yourself a favor and do some reading on this model. See if it is something you can push for in your community. If you are a youth pastor, consider making this your model of discipline among your students.

For a thorough list of resources, check out the Institute for Restorative Justice and Restorative Dialogue. Let us know what you think!