On Free Solo Climbing and Perspective 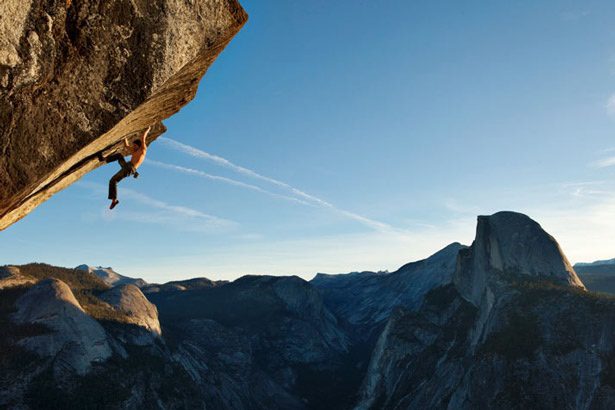 On free solo climbing and perspective
Over the last few months I have periodically shown a video to my groups about a rock climber named Alex Honnold. The first time I watched this video, I squirmed in my chair, just like I suspect you will. This climber climbs without ropes, and does so on the most difficult routes in the world. Sometimes I will show this video to students to get the conversation started about choices, support, and relationships. Really, this video will get people talking.
Inevitably, another topic comes up with students as we discuss this video, and usually I have to point it out. The sheer magnitude of what this guy is doing tends to overshadow a quote he makes between the 9:06 and 9:45 mark as the interviewer challenged his mindset as he takes these incredible risks. What is interesting is how he confidently states that he knows what he is doing while also admitting that he might not have the ability to know how dangerous his actions are because he is “too close”.
So, this discussion tends to come down to perspective. And in any real self-examination, we all need a healthy dose to really see what is going on. Think about it: if I held up my hand right in front of your face, you might not know what it is until you backed up to get a clear view.
One of my goals as I facilitate groups at Teen Lifeline is to help students gain perspective on their situations. Let me give you an example:
A young man (whom we will call John) was in one of my groups at an alternative school we serve weekly. He had been sent because one day he lost his cool with a student who had been picking on him and beat him up. The student he beat up also threw punches, but never ended up getting in trouble.
This mistake cost John a lot. He was a stud wrestler and a great student. He didn’t have much of a disciplinary record yet got kicked off the varsity wrestling team and put himself in a bad position with his grades. John felt slighted and was obviously upset about what had happened.
John was a good participant in groups, but I felt like he had something weighing on him as we worked through group each week. On week 6 of our curriculum we ask the students to chart out their previous six weeks on a graph with the other students to reflect on the “ups and downs” of their lives. This exercise is a powerful way to reflect on our reactions to successes and failures. Apparently this exercise had a profound impact on John.
The next week John came back with a different demeanor. At the beginning of group he shared about an “Aha!” moment he experienced in group the previous week. As he charted out his last six weeks he realized that he had never really recovered from what he perceived to be an injustice in his life. He had been sulking and feeling like a victim while the rest of his classmates had found ways to overcome their struggles. A weight had been lifted from his shoulders and he felt like he finally accepted what had happened and made the decision to move forward despite the injustice.
For John, perspective is all he needed to make peace with a difficult decision. Yet, many teenagers are not afforded the opportunity to slow down and truly reflect on life. At Teen Lifeline, we want to offer safe places where teenagers can get a healthy perspective on life so they can grow and move forward.
Just like the climber in the video, we all need some perspective. I can think of many times when the right person or group walked beside me and helped me understand something.
Who has offered you perspective as you walk through life? How has it helped? What was the difference?
Thanks for partnering with us at Teen Lifeline. We look forward to sharing more stories like this as we serve teenagers in crisis.