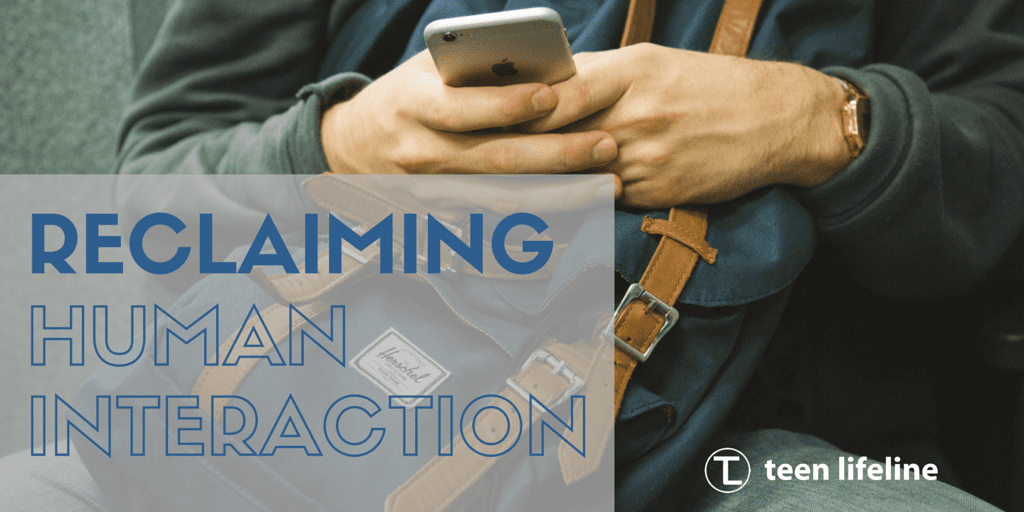 I am feeling old fashioned lately. As a relative late-comer to the social media scene, I find myself more as a consumer of these platforms (i.e. just reading and observing) than an actual participant. I like to post overly cute pictures of my kids or post some off-kilter observations of the world around me, but as for using social media as a place for serious discussion, I don’t know how to do it.

I’ve had some fun discussions with those just slightly younger than me (including a certain female member of our staff here at Teen Lifeline) about the merits, or lack thereof, surrounding how we use social media. I didn’t grow up with it but more engaged with it well into my mid to late 20’s – well past the age of indoctrination on such things.

With this worldview in mind, I find myself fascinated with media reports and conversations that start or are supported by “so-and-so tweeted (or posted) this.” When someone references a social media post as a conversation starter, my thoughts run something like this:

“Huh. So we have to lend credibility to a person (or entity) based upon some characters they punched into a phone that likely reflect some kind of haste or lack of forethought? Man. This MUST be important (sarcasm dripping here).”

Yea, I’m grumpy. And, I am not really focusing so much on the day to day stuff (though I wouldn’t say that is particularly important either) but more about how separated we can become with the reality of dealing with people and ideas by simple human interaction.

When we spend a significant portion of our relational energies on a digital platform, we lose the ability to see what our words do to people – whether good or bad. We need to see someone’s eyes light up when we enter a room. Conversely, we need to see the consequences when we say something irresponsible or hurtful.

I fear the more we divorce human interaction with, well….humans, irresponsibility and apathy will follow.

I already feel it in my own life. As a casual observer of online interactions, I see the horrible things people do and say to each other because they are not in the same room.

It’s like road rage. When someone cuts you off on the highway, you call them all kinds of horrible names, curse their dog, and scream so loud your five year old in the back seat might wonder who the stranger is driving the car. (No, that didn’t really happen….nothing to see here.)

When you have 2 tons of steel surrounding you, it is easy to feel invincible and say all the things you wouldn’t otherwise say if someone cut you off on the sidewalk. You might say something, but you definitely wouldn’t say bad things about their dog.

When it comes to social media, we don’t often consider the real people on the other side of the digital pipeline. It is almost as if they are just a profile pic, but not really a person – right?

As adults, we know there was once another way to interact. But students really do not. They are “digital natives” – exploring the vast terrain of 0’s and 1’s as pioneers in covered wagons. This is the world they live in. It is the language that they speak.

Yet as those who walk alongside and guide, we must be willing to create healthy space and perspective to know what it means to really be present with a person. Here are a few thoughts:

Yea, I might come across a little grumpy about this subject, but I also think I’m onto something here. We need the basis of our relationships to be physical, not digital. We need to find more ways to humanize, not polarize. The only way to do this is to look above our phones and into the eyes of the people around us.