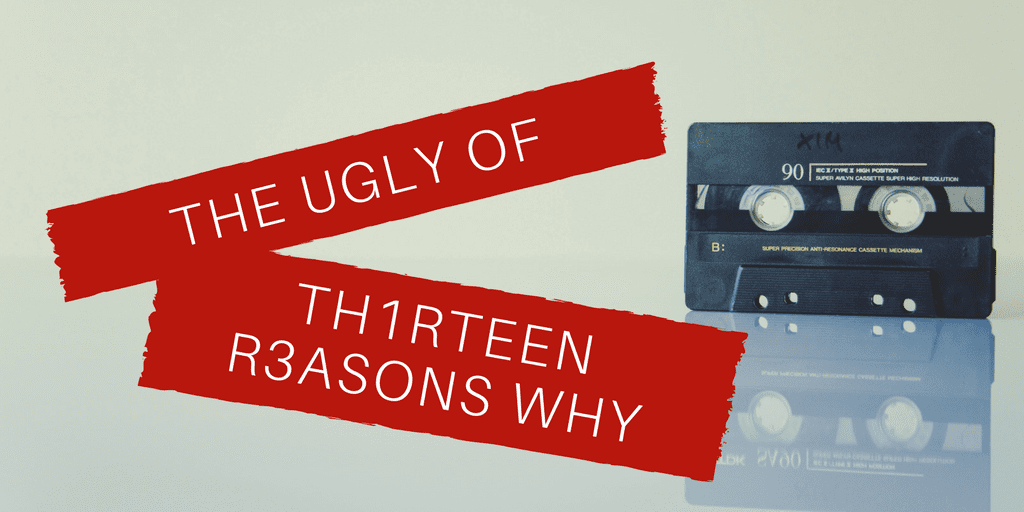 *This is the second in a series of three blog posts that we released Summer 2017 regarding season one of the Netflix series “13 Reasons Why.” Subscribe to the Teen Life Podcast to catch our current podcast series breaking down season two of the series. This is a great place to start though!

As a younger Millennial myself, I was both intrigued and disturbed by 13 Reasons Why. While watching the 13 episodes of season one, I saw why it was so popular. I understood why teenagers were flocking towards its authenticity and courage to face topics that are often shoved aside. I got how this polarizing show was starting conversations and making an often overlooked population feel heard and understood. These are all positive things; however, I saw several things that made me nervous.

Teenagers are at a vulnerable age, especially since they are so heavily influenced by the media. While I do agree with several of the things that this series can contribute to our culture, here are some things that I believe were lacking in 13 Reasons Why:

Unfortunately, I do not think that 13 Reasons Why showed healthy conversations in the series, either between teens and adults or between peers. If you watch the series, you will see conversations between peers that end in fights, curse words, and bullying. Whether it is conversations with Hannah or about her, there was very little understanding or empathy from peers. Even after Hannah kills herself, the peer response is to hang up a poster, lay out flowers, hide secrets, and continue to spread rumors. Teenagers who watch this series will not leave with a good sense of how to respond to a situation like the one portrayed.

When it comes to the adults, I found myself getting so frustrated with the conversations that were portrayed! Why in the world would a teenager watching this show confide in an adult after watching so many fumble the opportunities presented to them. Parents are invasive, oblivious or downright awkward. The school staff is also incredibly unprepared and even negligent in the case of the school counselor. This is not an accurate representation of the school staff we interact with.

While unhealthy conversation happens more often than we would like, and adults are sometimes unprepared for topics like suicide, rape and bullying, I wish 13 Reasons Why would have taken the opportunity to show positive adult and peer relationships. Kind words, empathetic mentors, and adults who are engaged and present can make a huge difference. I believe we see this message in the show, but they do not actually show what healthy, positive conversations actually look like in this context.

Where suicide is concerned, mental health often plays a vital role. While it is not always a factor, I was surprised that the series did not address mental health at all, especially after everything Hannah Baker goes through. From loss of friendships, a new school, and the stress of a struggling family business to rape, bullying, and suicide, Hannah needed help. Mental health is something many people shy away from, but there is nothing shameful about being aware of your mind and seeking help.

In addition to mental health, spirituality was completely absent from the show (unless you count the brief scene about tarot cards). By statistics alone, several of the characters would have some sort of belief system that they would turn to in a situation like this. There is not a single mention of prayer, forgiveness or a higher power throughout the 13 episodes. I know the impact my belief in the healing power of Jesus Christ has had in my own life, and I was disappointed that spirituality was not given a role in this series.

In our Teen Life Support Groups, we find that spirituality plays a huge role in the lives of students, whether they agree with my beliefs or follow a religion at all. To ignore the power and impact of spirituality, especially in times of stress and sadness, is a disservice to the characters and the audience watching. I firmly believe that we have to take care of and address the whole person – body, mind, and spirit – to truly have a healthy sense of self.

Obviously, 13 Reasons Why is told from Hannah Baker’s perspective – I understand that there must be a narrator to drive the story. However, because this series is told only from her view, I believe we miss the picture.

The other day, I asked a teenager who had watched the show what she thought of the series. Her response was, “What happened to Hannah was awful, but she was being dramatic about a lot of it – it’s unrealistic.” Understandably, Hannah had many things to be upset about. From her perspective, so many things went wrong that she had no choice but to kill herself. She was brokenhearted, her reputation was destroyed, she lost her spirit and soul, and she felt completely out of control. I cannot imagine some of the things she goes through in this show, but while she was begging for someone, anyone to care, she failed to care for those around her.

Hannah makes this statement in the very last episode, and it is so true! She did not show empathy or understanding to the other characters. While she is caught up in her life and how wronged she feels, she missed the broken home of one of her peers who is thrown out by mom’s abusive boyfriend. She missed how her own words and actions affected peers when she lashed out or made a scene in public. She avoided her own lack of courage when she missed the opportunity to save a friend.

In the midst of so much wrongdoing, I wish Hannah could have seen her classmates. Was it her fault? Should they have treated her the way they did? Absolutely not! But we need to teach teenagers to see the big picture and empathize with those around them.

We hope this helps you generate some context for opening up conversation with the teens you work with. What other questions are driving your conversations?