The Worst Thing to Teach a Teenager 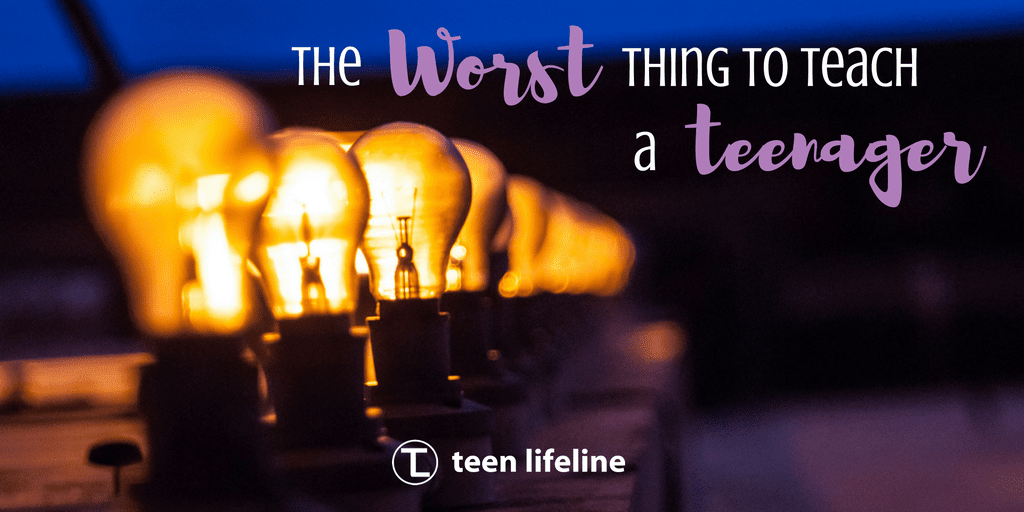 “Just be yourself.”
“Don’t let anyone tell you who to be.”

This is simply bad advice. This mentality puts teens on the defensive rather than empowering them to work at becoming who they can be.

If you are pushing back on this already, consider this engagement story and how it is probably different from ones you normally hear.

I asked my wife to marry me, and she said no. What did I do? I left her in a field in West Texas, hoping she would never find her way back to town.

Okay, not really, I waited. And in just a few minutes she came back over to me, apologized, and said she did want to marry me. I was so happy. I was happy because I had not asked her to marry me only because I felt like it, I asked her because I had made a decision. I wasn’t hanging my future on feelings that can change in minutes or seconds. I was grounding my future in a decision that was made after multiple conversations with many trusted advisors. That decision has proven to be the right one because I continue to make it every day.

The same is even more true for teens. We have got to stop telling them, “Just be who you are,” because they have NO IDEA who they are. They need guidance toward who they are becoming – something all of us are doing every day.

So what do we need to tell them instead? What do we tell them in our groups? If you’re still with me it’s because you care enough about teens to have a conversation that matters and invest in who they are becoming which is a beautiful thing to watch.

Seek out input and advice from the right people

The flaw in a “be who you want to be” mentality is that our perspective is extremely limited when it comes to ourselves. We compare what we know inside our head with what we see externally from people around us. This is especially detrimental to teens. They don’t have the life experience to discern the difference between character traits that shape and feelings that cause impulsive, detrimental decisions. In addition, it is nearly impossible to understand the effects or consequences of the decisions we see others make. Especially when many effects of those decisions aren’t realized for years or decades.

This is why it is so important to help teens discern who those people are. What helps a lot is to get them to think about a person they respect and trust. You may get some resistance to this but it is the exception that a teen really has no one they can turn to. This person may be a relative, coach or other role model. The key here is to help them explore who this person is and then create a plan for how they can seek input from that person.

Find something about yourself to change

We are all working each day to become a better version of ourselves. If you decide who you are as a teenager, it implies that you have arrived. This makes no sense. I don’t know anyone that is contributing at life, being a responsible adult and positively effecting the world around them who has stopped asking who they should be. Embrace change. If we encourage teenagers to decide who they are now, it gives them a false sense that the difficulties they face will be easier to deal with. The truth instead is that embracing change is what allows us to keep an open mind about how we can continually become who we should be. We need to be telling them that they will always be figuring out who they are, and that is what life is about!

Make a decision based on facts and truth, not on feelings

Deciding to be someone is a much better approach then being who you feel you should be. I don’t know about you, but I often hear my internal voice tell me how much I suck and how big of an idiot I am. If I listened to this voice, I would not feel like doing my work or caring for my family most of the time. Instead, I have to use self talk to tell myself who I want to be. One of the principles of successful people (not monetary success, simply life success) that I read about often is that they spend time each day telling themselves, often out loud, who they want to be rather than giving in to who they feel like being. This is a huge difference and one that we must encourage teens to embrace.

In a lot of ways the three ideas above can be summarized by choosing a mentality to anticipate rather than react. Living life with an “I can be whoever I want to be” perspective is a reactionary way to live. If you instead anticipate what is coming next (a class in high school, graduation, college, job, marriage, kids) you will be more likely to keep learning who you are rather than getting stuck thinking you figured it out as a teen.

These difficult discussions are why it is so important in our groups to offer the opportunity for students to discuss who the feel they should be. It is extremely important to explore these ideas. But the key is that you are exploring them. Making a decision of who you are because you feel a certain way one day and you decide to stick with that is only going to end in sadness on the day that you realize that’s not who you really wanted to be. If you decide to instead be constantly changing and becoming a better you, not only do you embrace the changes as they come, but you make the world around you a better place because you are willing to adapt and mold in a way that factors in all the input you receive.

So what’s next? How do we shift this cultural norm of encouraging people to “just be yourself” and instead actually help each other to become a better version of ourselves every day?