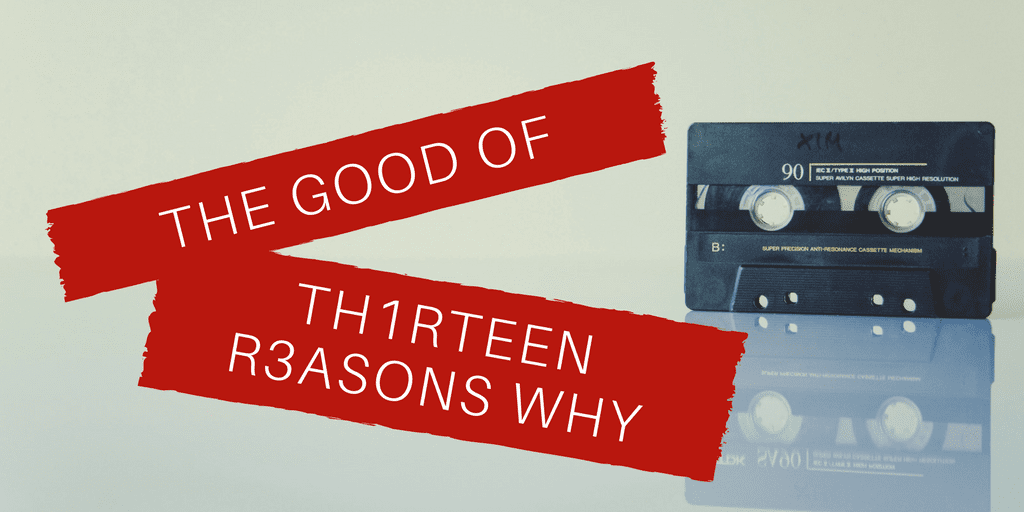 *This is the first in a series of three blog posts this week regarding the Netflix series “13 Reasons Why.” Sign up for our mailing list so you don’t miss the other two blog posts!

13 Reasons Why is a wildly popular series on Netflix. While Netflix does not release viewing numbers, Variety reports that it was the most tweeted show of 2017 thus far, having received more than 11 million tweets within the first 4 weeks of its initial release. The show is based on Jack Asher’s book by the same name and details the events leading up to the suicide of Hannah Baker, with 13 tapes identifying someone who played a role in her decision.

The series starts with: “Hey, it’s Hannah, Hannah Baker. That’s right. Don’t adjust your… whatever device you’re listening to this on. It’s me, live and in stereo. No return engagements, no encore. And this time absolutely no requests. Get a snack. Settle in. ‘Cause I’m about to tell you the story of my life. More specifically, why my life ended.”

This Netflix series highlights several hot topics including: suicide, rape, drug and alcohol abuse, bullying, and slut shaming. Be forewarned that it contains explicit language and several graphic scenes displaying sexual assault and suicide. Also, be aware that if you are parenting teens, then they probably have seen it or know about it, and so should you.

To start our series of blog posts, we wanted to discuss what 13 Reasons Why does well. We felt it was important to cover what issues are shown accurately in hopes that it makes you, as a parent or pastor, watch with eyes open to see what conversations you need to have with the students in your life, conversations held in private and without judgement. While not an easy watch, we hope these positive takeaways raise awareness of topics that are relevant for youth today. Our next blogs will cover what topics are missing in 13 Reasons Why and will provide a discussion about what should we do now.

13 Reasons Why accurately portrays several facets of life youth face daily. While there is some exaggeration, many of these scenes display an element of truth. Here are just a few of the things you can look for while watching the series:

Ultimately, all of these are tied together by the realization that hiding information will make it disappear or will allow youth to avoid consequences. At the end of the series, it shows the reality that hiding is much more difficult than being able to discuss the truth and take responsibility for your actions.

Hannah’s quote above, repeated at least twice during the series, reveals the truth that suicide does not have one specific look or feel. While there are risk factors that increase the likelihood of dying by suicide, it does not ever look or present the same. Our main take away from 13 Reasons Why is that even though suicide does not have a set appearance, little things can make a huge impact in a person’s daily life. As seen in the series, there are several moments that were brushed off as being unimportant or insignificant from the other students’ perspectives.

There are also several interactions with adults that were not handled appropriately, but on the surface, many of these seemed relatively minor. But Hannah, when telling her story, indicates that if even one of these moments had played out differently, it could have changed her decision to end her life by suicide.

No one can have a full awareness of another person’s story and struggle. We as adults need to model that every opportunity to treat someone with kindness and respect matters – that the little things can quickly become big things. And that is the main reason why we at Teen Life do what we do. Oftentimes, one hour a week seems insignificant in the scheme of a person’s life. However, we firmly believe that what happens in that one hour, or even in a single interaction, can impact the perspectives and lives of the youth we are privileged to serve. 13 Reasons Why begs you to be aware of how you treat others and how your actions can impact their lives. We’ll leave you to reflect on how you impact others with one last quote from Hannah, who maybe says it best:

“I guess that’s the point of it all. No one knows for certain how much impact they have on the lives of other people. Oftentimes, we have no clue.”

Beth Nichols is Teen Life’s Administrative Assistant. With her background in social work and experience as a mom of 4, her perspective is invaluable.